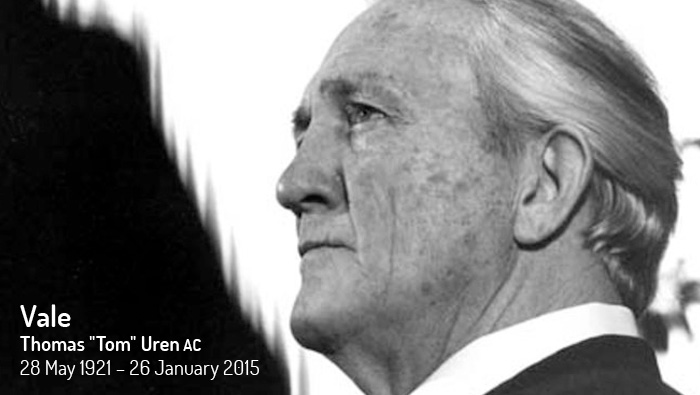 CAPP mourns the death of the Hon. Tom Uren, the Minister for Urban and Regional Development in the Whitlam government.

In 1974 Tom Uren was instrumental in saving one of the CoPP’s most prized heritage assets, the Emerald Hill precinct, from a proposed redevelopment which was being marketed as “Melbourne’s second CBD”.
Bounded by Cecil, Dorcas, Park and Clarendon Sts, the precinct was home to some 300 mainly low-income residents who lived in properties owned by the Melbourne Family Care Organization.

The area was put on the market in late 1973, leading to a concerted campaign against the redevelopment by the South Melbourne Council, the Emerald Hill Association and the Emerald Hill Residents Committee. Apart from the displacement of the residents, redevelopment would have resulted in the loss of priceless heritage properties and the destruction of an intact Victorian precinct, which today is considered one of Victoria’s most significant heritage assets. The commercial buildings collectively represent a late 19th century precinct unmatched anywhere else in Victoria, and the arrangement of residential and commercial properties within the precinct is unique in Victoria.

Tom Uren was a strong supporter of heritage and natural resources and was instrumental in the establishment of the Australian Heritage Commission. He intervened in the sale and the Whitlam government made an interest-free loan of $3.5 m to the Hamer State government which enabled it to purchase the properties and to ensure that they remained in public ownership.