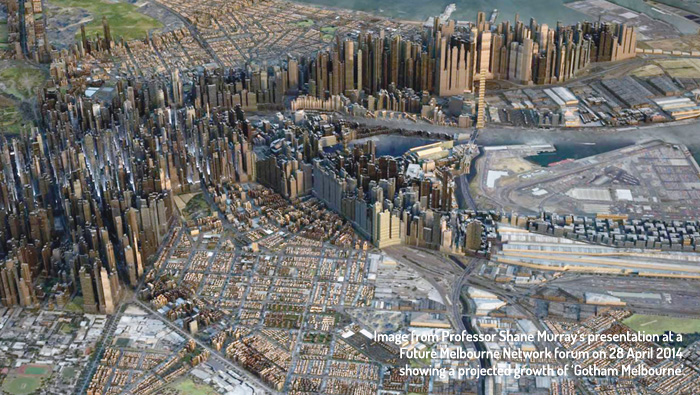 With only days before the announcement of the Fishermans Bend Structure Plan, the visionary potential of the 240 hectare area is about to be trashed on the altar of a funding and development model  which is totally untested and not shown to work anywhere else in  Australia. A model we have seen before in the City of Port Phillip, CoPP. It was the model which also fuelled the dreams of the developers for the Triangle site – a dream that led to a monster baby  which, even when it was mostly concealed below ground, could not help but reveal its ugly head to the world crying out for more. In that case it was eventually pacified and made to go away with a $2 million dollar deal between the City of Port Phillip and the developer. I don’ think that the Council or the Government is likely to get out of this one so cheaply.

Right from the very beginning the Minister for Planning, Matthew Guy, set a course into unchartered territories. Abandoning planning practice, he rezoned the land at Fishermans Bend from its industrial past to a bright new future as part of a newly designated Capital City Zone. At the same time in July 2012, under amendments he made to the Planning Scheme, authority was vested in the Minister for Planning who publically announced that development applications within the Fishermans Bend Urban Renewal Area (FBURA) could be submitted to him, his only proviso being that all approvals would be subject to a Development Contribution Plan.

Reckless as this process seems many applications were received on this basis. In the same way as firms of solicitors go out seeking work on a profit share arrangement, a series of high profile architectural firms submitted proposals for developments for the Minister to consider. Whilst some show all the signs of coming out of back drawers for failed projects in Dubai, other applicants worked on development applications which were site specific with the possibility of merit if they were in  response to a properly developed planning process.

Within 12 months the Minister’s desk had been inundated with a raft of development proposals, all for high rise and all for only one area, the area designated as ‘Montague’. With no structure plan in place, it was inevitable that developers would cherry pick this area which has access to transport, some infrastructure in place and in closest proximity to the city. Of course picking this area was far from visionary. The CoPP had already identified it as being ripe for re-development and had, over the course of some years of planning, taken all the steps needed to have the area rezoned for mixed use with a fully developed structure plan ready to go.

In September 2013 with development permits on a temporary hold, the Minister released the Fishermans Bend draft Vision and Interim Guidelines through Places Victoria, now rebadged as the Metropolitan Planning Authority ,MPA. This Authority has been waiting in the wings to be given the broad planning task for overseeing the implementation of Plan Melbourne. However in terms of staffing and history it is essentially a reiteration of Places Victoria with Peter Seamer still the CEO. Far from independent, the Authority is clearly set up as a creature of the government. It is not representative, it is not transparent nor is it at arm’s length from its funding source. Most recently, the Minister for Planning initiated a development approvals levy as a means of funding some of the activities of the MPA. The more approvals given, the bigger the cake for the MPA.

Though community responses were required to the draft Vision by December 2013 with the promise of a structure plan in response in January 2014, nothing has materialized. We understand that the Minister, the MPA and the Councils (CoPP and City of Melbourne) have been involved in a series of negotiations relating to the very real issues which this hastily engineered planning project demands.

Eighteen months have now passed since the Minister’s invitation for development applications. Pressure has being applied by developers to take some action on the development applications for around 9000 unit. Most of these applications are located in Montague within a small two block area bounded by Gladstone Street, Ferrars Street, Boundary Road and City Road. Applications in this area well exceed any of the expectations of the Montague Plan or the draft Vision almost all 30 towers being 30 storeys or higher. A further two high density applications for 6 towers several of which are in excess of 50 storeys were received in the northern reaches of Montague in Johnson Street and Normanby Road.

The Minister has now approved of 4 reasonably uninspiring and unremarkable developments, including some for 8 storeys with zero car parking allocations. Several of these went under the radar and were approved without any request being made for contributions to the developers contribution plan (DCP). Very high rise developments proposed in Johnson Street and Normanby Road were slated for consideration by the Minister. Both applications were submitted by Rothe Lowman and seemed to be on the point of approval by the Minister following their submission to CoPP for their comment in February. They were subsequently analysed by the Fishermans Bend Working Group, this analysis showed that on almost all measures which could be applied, including the aspirations of the draft Vision and the requirements proposed to apply to all development under the interim Design Guidelines, these developments failed to comply.

Significantly however in June the State Budget announced a realignment of the Melbourne Rail Link Project with a new underground station at Fishermans Bend (Montague) and construction theoretically starting in 2017. If this project is to go ahead it will need an exclusion zone for construction in the same area that had been previously seen to offer the most immediate opportunity for development approval: the triangle generally bounded by Normandy Road, Johnson Street and the Westgate Freeway.

Another reason for delay appears to be the State Government proposition that all of the infrastructure for Fishermans Bend should be achieved by developer contributions alone.  In February at a CoPP public forum on the Fishermans Bend, Jane Monk, the director of the inner Melbourne Team for the MPA, emphasized that the MPA was actively seeking money in the budget and was optimistic about receiving funding for FBURA. Following the release of the budget it is apparent that there is no separate allocation for funding of the ‘biggest urban renewal project in Australia’ thus leaving the MPA to oversee the first urban renewal project to be undertaken without Government funding of any substance in Australia if not the world.

Initially the Minister quoted a population of between 20-50 thousand people to be accommodated in Fishermans Bend. Since then it has been modelled at 80,000 in the draft Vision. On the basis of calculations done by Places Victoria, infrastructure requirements would exceed 1 billion dollars for roads, drains and some transport (excluding the Rail Link project and almost certainly not the Collins Street extension). Even with this modest platform, the Government’s limit for DCP’s has been set at $15900 charge per unit which will not meet the billion dollar infrastructure bill. Based on populations and densities proposed in the draft Vision, the developer’s contribution would need to be more like $30,000 per unit.  Charges of this order are unheard of – in the growth areas they are typically about $3000.

In an effort to revive the project the MPA now appears to be planning to achieve the target for funding by increasing the number of units which can contribute to the DCP. This has two implications – one is that the Structure Plan due for release will abandon the settings for height and density envisaged in the draft Visions and second, as a consequence of this increased density even more infrastructure will be required.

This scenario was confirmed in our discussion with Jane Monk this week when she said that buildings in the area were likely to be ‘much much higher’. On this one Jane Monk also gave us her views. She was adamant, repeating statements made in public forum in February, that she for one was not scared of heights and  sees an ‘ appetite for this form of development’ describing the role of the MPA as being an ‘enabling’ mechanism rather than a ‘blocking mechanism’ for developers.

She also sees the Government budget statement of commitment to the station at Montague as a reason to justify radical changes to the draft Vision. According to Jane Monk, the rationale is now clear for all to see – if you have a new piece of infrastructure like a railway station then ‘very high buildings’ are essential if the area is to become an exciting vibrant hub of activity rather than a by-way for people on their journey to the city. It however begs the question as to why the Government is hell bent of providing transport infrastructure in the very area of Fishermans Bend which clearly does not need it?.

The other issue for the Government and the MPA is the issue of timing. Clearly the per unit charge can only be applied when the units are ready for occupancy which is a long way down the track. On this issue Jane Monk agrees that the timing is a problem despite repeated assurances from the Minister that ‘the infrastructure will be there when the residents arrive’ . As Jane Monk has also repeatedly said, this is a long term project which means that the time lag could be measured in decades. Clearly it is a conundrum, infrastructure has to go in first if the buildings are to be built but without upfront money then who will provide the infrastructure?

With the MPA unable to shift the Government to provide the upfront funding, the draft Vision and the projections embedded in it appear to be likely to be thrown out the window. Jane Monk also confirmed widespread rumours that the Minister will take personal responsibility for the applications for Montague in front of him with the most likely result that many of the applications south of the railway line will be approved before the MPA takes over.

Adding to density and height, failing to fund the infrastructure needs in a timely way and giving approval to the line up of developments for Montague is a clear breach of promises made to our community and will leave as legacy of an impoverished public realm.

So with no plans to acquire any open space when and where it is needed, limited funding from government for community facilities, limited mechanisms envisaged to require developers to build other than wall to wall and extending unlimited heights from 45% in the draft Vision to a rumoured 77% of the area, expect a pitiless environment devoid of parks and public spaces, light or environments suitable for children. Do not expect that the people owning the units will live in Fishermans Bend, expect a fight for every community facility, start now to wire off the Murphy Reserve and other facilities as they will be overwhelmed. Tell the CoPP to get ready with buckets of money so that it can come back later to infill the demand for facilities common to the rest of the community. Remind ourselves of what we went through to stop the Triangle redevelopment and recognize that when Government steps away from the public realm with few identifiable exceptions, we are all the losers.