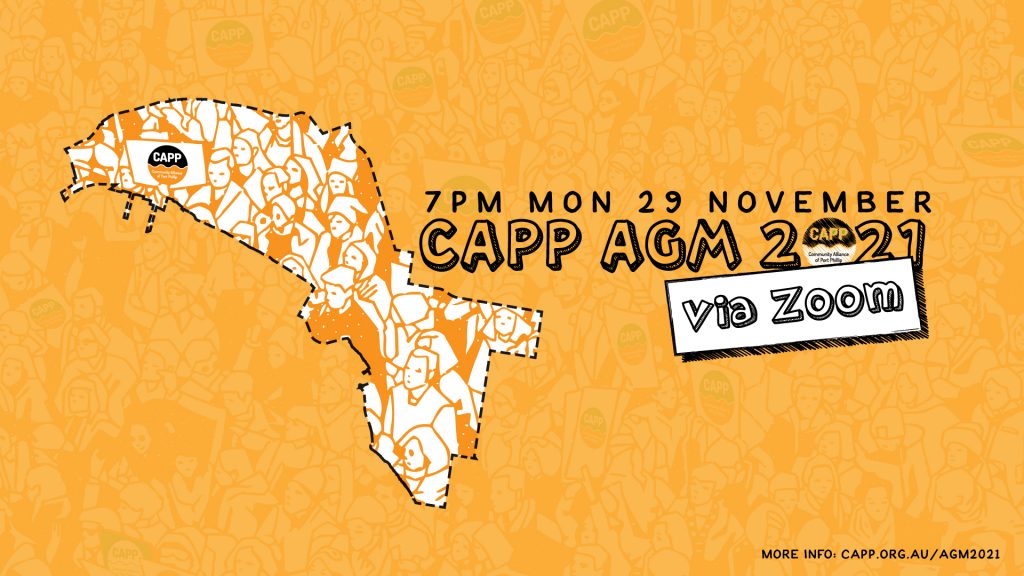 You are warmly invited to attend the Annual General Meeting of CAPP on Monday 29 November at 7.00pm to be held via Zoom at this link:

You will find the AGM Agenda, the 2019/20 AGM minutes and the Secretary’s and Treasurer’s Reports HERE.

This last year has been a challenging one in many ways. Not only have we been dealing with a global pandemic and repeated lockdowns, but we have also seen conservative forces gain a stronger place on our Council following the 2020 Council election. This was despite a strong community campaign led by Progressive Port Phillip – a campaign that was initiated by CAPP uniting with other local activists to promote a positive and progressive vison for the city.

The CAPP Committee believes it is time to reflect on our activity over the last year and think about the future. So, we invite you all to join with us in an important discussion at the AGM:

Re-invigorating CAPP: where to from here?

We urge you to consider nominating for the CAPP Committee by completing a nomination form here. Several committee members from this year will not be re-nominating and we welcome nominations from members who wish to get more involved and to contribute fresh ideas on the Committee.  Most of us have been committee members for years and new faces, new energy and new ideas would be wonderful!

Do get in touch with one of us on the numbers below if you would like to discuss nominating and do get your nomination form in no later than five days prior to the meeting.

CAPP memberships are now due and only financial members will be able to vote at the AGM. So please renew your membership here before the meeting.

Looking forward to catching up with you all at the AGM,